Allotment of houses by MHADA disapproves Govt stand in the Court 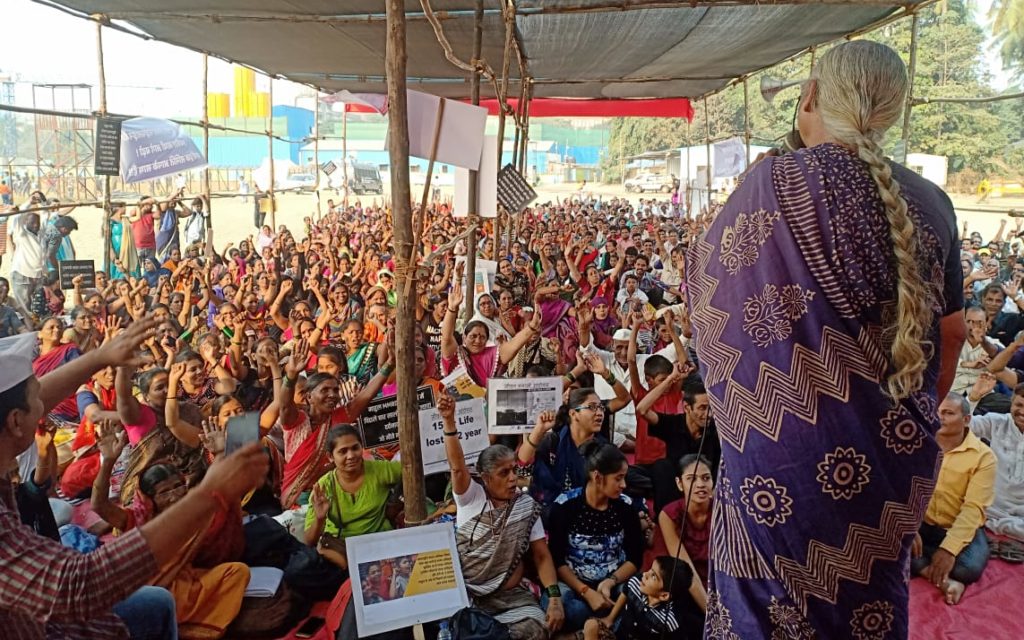 HC pulls up Maha govt for failure to implement Court’s order
CM continues to remain mum on the matter of life and deaths
Protesters harassed by Police
Mumbai | 19th Dec: MHADA president Mr. Uday Samant confirmed us on phone that MHADA has sanctioned the proposal to allot 300 houses to Mahul resident. During a telephonic conversation yesterday he has invited us to discuss the procedure of allotment which will also entail more details. The allotment of houses by MHADA also disapproves Maharashtra government stand in the Court about non availability of alternative houses.
On 8th of August this year, the Bombay High Court directed the Maharashtra Government to provide alternative housing to the residents of Mahul who are facing life threats due to toxic atmosphere in that area. Instead of coming up with some solution, the Maharashtra Government shamefully submitted in the Court that there are no houses available which can be alloted to Mahul residents. Agitated by this stand of the Government, the residents of Mahul staging an indefinite dharna since 28th of October. On the third day of the protest, the Shive Sena party intervened and held a meeting with MHADA. The president of MHADA is an MLA of Shiv Sena. Since the party is sensitive on the issue which involves the lives of 30,000 residents, decided to handover as many houses as possible to the residents of Mahul. MHADA presidents decided to allot 300 houses in the first meeting only. While two other major housing agencies-MMRDA and SRA are under Chief Minister Devendra Fadnavis. Mr. Fadnavis is the chairman of both these authorities who have still not found out time to take decision on the matter involving the lives of thousands of residents and instead getting false affidavit filed in the Court.
The level of toxicity in Mahul is so high that it is claiming lives on a daily basis. Day before yesterday, two people died. One due to cancer and other due to heart attack. They were healthy before they were forcefully shifted in Mahul last year. So far more than 150 people since 2015 in Mahul.
On the other hand, the Bombay High Court in its order based on hearing on 13th December, 2018, rapped the Government for its failure to implement the Court’s order. On 8th of August, 2018, Court directed the government of Maharashtra to provide alternative housing to Mahul residents. The Court got angry after seeing the worst finding in the report prepared by IIT Bombay about the infrastructure facility, health, multiple risk hazard, pollution along with other aspects, in Mahul. The Court said that the report of IIT Bombay confirm the complaints which the residents of Mahul making since more than a year.
It’s the 54th day of the protest today. Residents of Mahul are demanding a meeting with Chief Minister and resolution of the issue. So far, the state chief has not cared to give an ear to the plight of the residents who are facing life threats. It’s high time that the Chief Minister take quick action to save thousands of live. Until then the dharna of Mahul residents will continue in Azad Maidan.
The police is continuously harassing the peaceful protestors in Azad Maidan. Protestors are forced to move out of Maidan every night and forced to sleep without any shelter on cold windy nights at CST station.
Tagged Bharat Petroleum, BMC, demolition, Devendra Fadnavis, Ghar Bachao Ghar Banao, Housing For All, Jeevan Bachao Andolan, Maharashtra Government, Mahul, resettlement and rehabilitation