1. Golibar Basti
Golibar basti is a gigantic slum which consists of 46 societies in Mumbai. In 1995, MHADA implemented the SRA which appoints the builders to construct housing on slum land. In 2003, Ganesh Krupa Society is one of the 46 societies that signed a redevelopment agreement with Madhu Constructions. But Madhu Constructions entered into agreement with Shivalik Ventures without any knowledge or consent of the people. Many houses have been demolished. They have built 14 storey building which is illegal and has built on Air Force land. The Air Force filed a case against Shivalik Ventures. On 24th November in the year 2010 the police and MHADA authorities came to demolish rest of the houses in GKS without any notice but the people stood together and refused any demolition. Following this incident, the society and members of Ghar Bachao Ghar Banao managed to got a verbal stay order from the Chief Minister.

2. Mahul
Over 30,000 people from slum areas of Powai, Ghatkopar, Chembur, Vakola and Bandra has been shifted to Mahul by the Brihanmumbai Municipal Corporation when it demolished their home after the order of Bombay high court to clear all hutments within 10 meters of Tansa pipeline citing slums as illegal and threat to the security of the area. The oil refineries, chemical plants and other industrial units in the Mahul contributes to high level air and water pollution. The resettled residents are suffering from severe health issues and 100 people have died since June 2017. A 2015 interim judgement by the national green tribunal stated that Mahul is “unfit for human habitation”. People currently living there assembled under GBGBA and filed a case against the government to fight against the injustice happening in Mahul. On 8 August, the Bombay high court ordered the BMC to stop any further resettlement in Mahul, and to decide on rent compensation or temporary accommodation for the remaining Tansa pipeline-affected people. The high court has also asked the IIT to conduct a holistic survey of Mahul, which will take at least four months. It was landmark achievement of GBGBA’s movement for the resettlement of project people to better place. However, orders were not implemented for almost one year. GBGBA conducted protest marches to force government to implement the court’s order. On March 6th 2020, State Environment Minister Aditya Thackeray distributed the first batch of 288 houses and promised that remaining allotment will happen as and when houses are available. This is a significant victory, however, the final goal will be achieved only when the order is implemented in it’s true spirit and all residents are rehabilitated.

3. Children Learning Centre
The Children learning centre is an initiative taken forward by GBGBA for the benefit of the children from the lower stratum of the society. As the name suggests it is a centre for providing basic education to the children residing in slums so that they are well prepared for the formal education process. The presently active centre is in Shivaji Nagar in Chembur West coordinated by Mr. Gulab Ansari, who is a resident of the respective slum. Also, known as Balwadi, the centre provides education free of cost and has a nominal monthly expense of only Rs 12000. Recently four children from this centre have been successfully admitted in a school authorized by Brihanmumbai Municipal Corporation. Legal and child rights activists have also conducted constitution classes for children in the informal settlements.

4. Bheemchaya
Bheemchaya Chawl, a slum in the Vikhroli region of Mumbai has been facing destruction and demolition by the Forest Department of Maharashtra. When on the one hand Bhimchhaya basti in Vikroli was demolished citing that the residents are the threat to the mangroves, on the other hand big infrastructure projects are given permission under the name of ‘public interest’. The conflict is between the slum dwellers and the forest officials where the forest officials claim that the land of bheem chaya is illegally encroached by the dwellers. The dwellers claim that they are protected as per government’s rule and entitiled for rehabilitation. The case of the slum was in the court and on June 1st 2018 residents got stay on the order of demolition, but by then Assistant Kandivalan Officer has forcibly demolished many houses. To speak out against this, residents of the slum, organised under GBGBA declared Dharna Andolan on 5th June. Their struggle is continued till date.

5. Mandala
Mandala basti from Mankhurd was demolished more than once in last 12 years. Mandala was supposed to be the pilot project under the Rajiv Awas Yojana. This is a place where shanties were demolished by MMRDA and other government authorities. Demolition occurred in that place without any prior notice. As a result of this, the homeless dwellers staged a protest. Now GBGBA with the support from the dwellers have launched the Awas Haq Satyagraha for rehabilitation of people affected by the eviction drive. In this Satyagrah, residents, whose houses were demolished took upon themselves to build their own houses. Around 1000 families of Mandala rebuilt their homes in June 2015, on the same land from where they had been evicted.

The collapse of wall in Kurar village, Malad East on the intervening night of 1st and 2nd July, 2019 amidst heavy downpouring, claimed 31 lives and injured several hundred residents of Ambedkarnagar and Pimpripada. GBGBA organized a fan-finding into the matter which concluded that the collapse of wall was due to poor design and held Government of Maharashtra and Mumbai Municipal Corporation responsible for it. A case has been filed in this matter in the Bombay High Court in the year 2020 by the local residents demanding their rehabilitation pending since 1995.

After the rise of homelessness was reported in many newspapers, the GBGBA team looked for places to provide shelter to homeless persons in the city. It was shocking to find that despite repeated orders from the Supreme Court, availability of funds for constructing homeless shelters in Mumbai, the authorities have done little to make it a reality.

There is no special department to look after the issues of homeless persons and ensuring them safe shelter.

The real ordeal was when we tried to arrange a shelter for a poor old lady abandoned by her family. Since her family could be identified and owing to her age and the pandemic situation, several procedures needed to be followed to secure her admission in an old age home. Owing to the tedious process of formalities and with no department to take responsibility of homeless persons, it took us almost a month to make authorities clear the formalities. Without a roof on her head, even at such advanced age she was forced to sleep in open in the cold wintery nights. In the meantime, we occasionally provided her with support for her survival. Finally, the old lady was sent to an old age home yesterday with the help of Agripada police station.

Based on this incident and other reported instances, we have filed a representation in the Maharashtra State Human Rights Commission whose hearing has started. 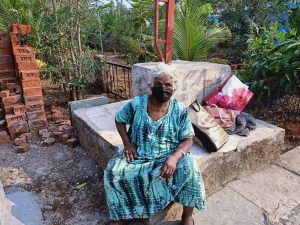