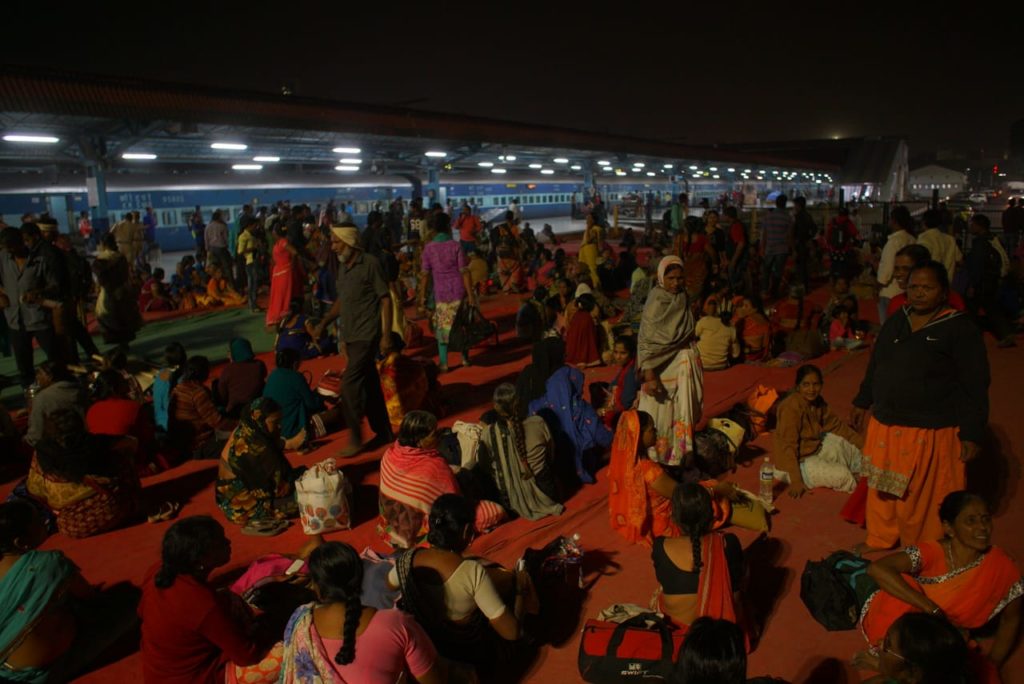 “We will not leave the Azad Maidan untill the government implements The High Court’s orders”, Mahul residents have taken firm resolution
The Chief Minister denied the assurances given by the ministers of his own government
Mumbai | 17th Dec: Last night, the people, who were protesting at Azad Maidan against their failed rehabilitation at #MumbaisToxicHell Mahul, were forced by the police to leave the ground. As there was no substitute Mahul residents had to be spent the night at platform no. 18 of the Chhatrapati Shivaji Terminus. Since thousands of people were asked to adjust in less space on that platform, the citizens had to face many difficulties while staying there.
“There was less space on platform 18, people were sent to platforms 10 and 11. We had the women with newborn babies and children with us. Many people fell sick in the cold night, and also suddenly a woman started experiencing chest pain. Water in the Bathroom was provided only for half an hour. Women had to suffer a lot, but still Chief Minister has no sympathy for us ” , said an agitated protester Puja Pandit
Today, ‘Jeevan Bachao Andolan’ completed 51 days. The Bombay High Court on August 8, 2018, had directed that the government should shift the Tansa Pipeline Project affected people from ‘Critically’ polluted Mahul to a safe place. It was also clarified in the interim report given by IIT Bombay following the order of the High Court that staying in Mahul is risky. According to that report, the air in Mahul flows in the direction of the rehabilitation site for most of the time of the day carrying smoke coming from refineries with it. It was also stated in this report that due to the wrong planning of the buildings constructed for rehabilitation, the homes in these buildings do not get enough sunlight and airflow. This causes spread of many diseases and pandemics as well.

Also, Environment Minister of Maharashtra, Ramdas Kadam, wrote to the Chief Minister Devendra Fadnavis that Mahul was not suitable for human inhibition and its residents should be taken out of that area as soon as possible. Also, In December 2015, Mahul had been declared a highly polluted area by National Green Tribunal, which also stated that there is danger to the health of the people living there.
After the ‘Jeevan Bachao Andolan’ initiated by the of the people of Mahul, there was some positive outcome. On the third day of the movement, MHADA announced that 350 houses would be provided to Mahul residents. On the next day, after the gheroa of the Housing minister Prakash Mehta’s house, he agreed to the meeting with the Mahul Residents. In that meeting he expressed the hope that 5500 houses of Kurla HDIL can be alloted to the residents of Mahul and promised that he will discuss this proposal with the Chief Minister. The Chief Minister denounced the deep inspection by the reputed institutions and the assurances given by the ministers and the authorities of the government.
Since the pollution in Mahul has claimed 150 lives so far, the silence of the CM on this issue is a matter of shame. Police stopped the nearly 7000 people from going to the Mantralaya to demand safe housing, so they decided to move their march at Azad Maidan. While 30,000 people are in danger, the Chief Minister spent the entire day inaugurating and speaking in various events.
Even when he was in Mumbai, the Chief Minister did not give time to meet the people and sent a message that he was not in Mumbai. He showed presence near the Gateway of India, close to Azad Maidan on December 15, but he did not come to meet the people in trouble in his state.
Meanwhile,  Bhalchandra Mungekar, former Rajya Sabha member from Congress, former Vice Chancellor of Mumbai University and  Satyendra Jain,Health Minister of Delhi Government  also visited the agitation site to express the solidarity with the struggle of Mahul Residents. Similarly, many progressive organizations in Mumbai, the labor organization, Women’s Organization, PUCL participated in the protest and showed support. Also, citizens of all the slum settlements from Mankhurd to Malad showed their support to the movement.
Some sympathetic eminent citizens also wrote to the Chief Minister asking him the safe housing to Mahul residents.
The protestors are determined to continue their agitation in Azad Maidan till their issue gets resolved.
Tagged Bharat Petroleum, demolition, Devendra Fadnavis, Ghar Bachao Ghar Banao, ghar bachao ghar banao andolan, Housing For All, Jeevan Bachao Andolan, Maharashtra Government, Medha Patkar, Mumbai, resettlement and rehabilitation