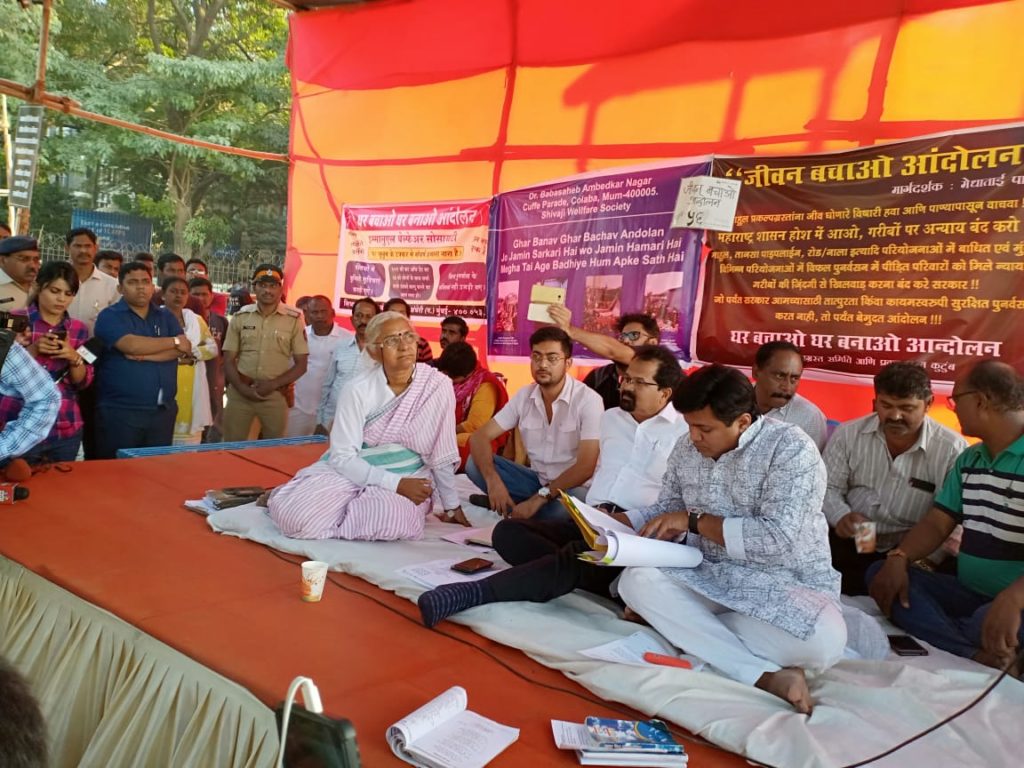 Mumbai | 22nd December:
After 55 days of dharna by the residents of Mahul demanding relocation as per Court’s order, CM Fadnavis finally broke his silence and held meeting with the residents under people’s pressure. CM Fadnavis however could have done more than what he offered as a solution to the problem. He simply constituted a committee of few top bureaucrats with the same mandate which the High Court has already directed the Government of Maharashtra to do four months back through its order dated 8.8.2018.  No resident is included in the Committee nor any deadline is set. We believe that CM Fadnavis would have acted on the same lines as the MHADA did. The meeting with CM was held on a condition that activists who are fighting along with residents will not be allowed in the discussion with CM. Certainly CM wanted to avoided negotiations on key issues.
On the third day of the protest, MHADA had called for a meeting with the residents on the insistence of Shiv Sena youth leader Aditya Thackeray. Looking at the sensitivity of the issue which involves lives of 30,000 Mahul residents, MHADA’s president Uday Samant immediately decided to allot 300 houses lying vacant with MHADA in the first meeting within few hours. We expected the same from the Chief Minister in the meeting as we have made several representations to him in which we have provided information about the availability of thousands of PAP tenements with MMRDA and SRA. One cannot believe that each of these authorities cannot have record of its own properties. Instead of taking decision on alloting these tenements to Mahul residents, he chose a longer route without acknowledging the urgency of the matter. There is a constant threat to life in Mahul. It is an on going disaster. We expected CM to treat it an emergency situation and take quick decision.
The failure of the Maharashtra Government to implement the Court’s order to relocate Mahul residents who are facing life threats due to toxic atmosphere in the area, has claimed many lives already including three deaths in last three days. Had CM took decision immediately after the Court’s order, life of all those twenty people could have been saved who died after Court’s order. Whatever be the politics behind the screen , the state government must priorities the issues of poor who always suffer at the alter of ‘development’ and shed it’s callousness. Government’s tardy response to people’s demand and Court’s order is jeopardising the lives of Mahul residents. Yesterday, it was the opportunity for the CM to fix his mistakes.

Since, the Chief Minister has not addressed the issue of Mahul residents, the agitation continues and the residents await  assurance to include two more members as suggested in the committee and a deadline for completing the task at the earliest within the next one week to be followed by the process of actual allotment. It is time for quick decision not for any more discussion.