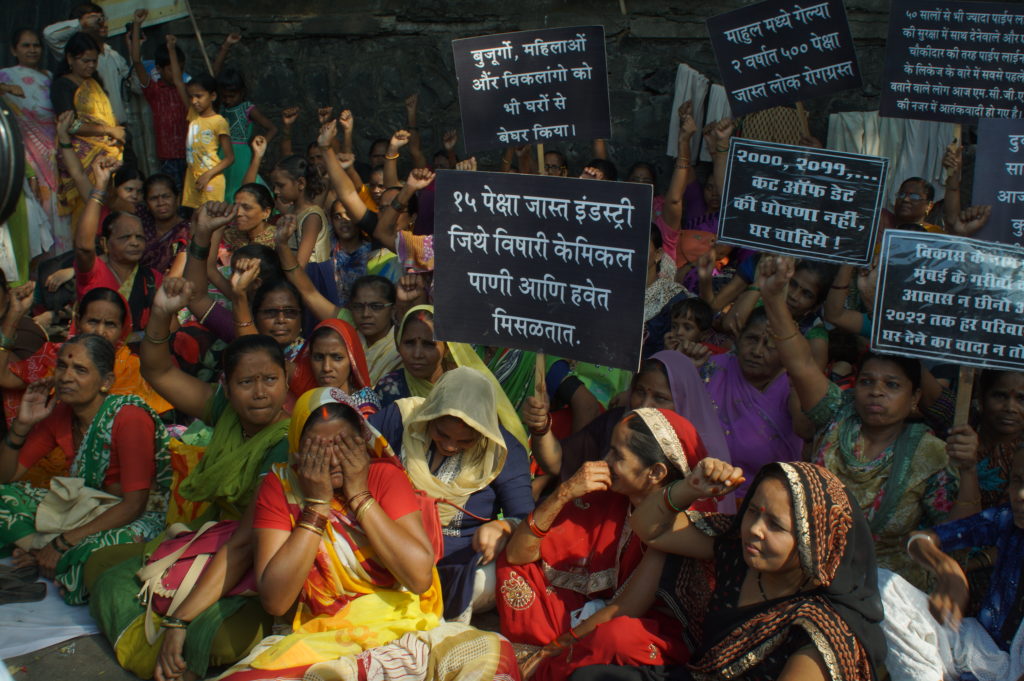 Struggle to continue until each family gets safe housing

Mumbai: The ongoing ‘Jeevan Bachao Andolan’, initiated under auspices of Ghar Bachao Ghar Banao Andolan by thousands of citizens staying in Mahul, has entered the third day with many of them holding the fort at Ambedkar Nagar, Vidyavihar(East) to protest against their rehabilitation to Mahul. Mahul, located in Trombay, is one of the most polluted areas in Mumbai and has been rightly called the ‘Toxic hell of Mumbai’. After three days of continuous protest, there was some relief as the Maharashtra Housing and Area Development Authority (MHADA) came forward with a proposal for housing the citizens forced to live in Mahul. Today, the delegation from protesting citizens met Uday Samant, Chairman of MHADA and he agreed to give 300 tenements to the affected citizens from Mahul in the first phase. Although 300 tenements are very less in comparison to around 5,500 families looking to be rehabilitated away from Mahul, this is being seen as a start from a largely apathetic and unresponsive Maharashtra govt. Further, a meeting has been scheduled with the Chief Secretary of Maharashtra on 3rd of November to find out more tenements.

The protesting citizens have decided that the demonstration will continue until each and every family gets a safe accommodation. Today evening a delegation of the protesting citizens met with the Minister of State for Housing, Shri.Ravindra Waikar. He listened to the grievances and promised that he would personally speak with the Chief Minister of Maharashtra and also raise the issue in the upcoming assembly session.

After facing continuous apathy from the government and continuous struggle to change their site of Rehabilitation (i.e. at Mahul) the affected citizens decided to start ‘Jeevan Bachao Andolan’ (Save Life Movement) on the morning of 28th of October and decided to reclaim the place from where they were displaced. Around 30,000 citizens had been moved from Tansa to Mahul when a pipeline was to be constructed in the region in 2017 and since the very beginning, these citizens had been continuously opposing their site of rehabilitation. They had been appealing to the government to find a better place for them to live owing to the high level of pollution in the Mahul region. The National Green Tribunal (NGT) had already declared Mahul to be an ‘uninhabitable’ place in 2015 and even after that Maharashtra Govt decided to put lives of more than 30,000 citizens in danger. It is for this reason that these affected citizens of Mahul have been calling this rehabilitation a planned genocide of the urban poor. Reports from various NGO as well as from the KEM hospital has proved that Mahul is critically polluted and its pollution has led to the death of over 100 residents in the last two years. Also, a large number of residents are suffering from various health issues.

In August this year, the Bombay High Court ordered the Government of Maharashtra to either relocate the Tansa Pipeline Affected citizens to a better place or compensate them enough so as to enable them to rent a house in Mumbai. However, the Govt has shown lack of will to act on the order.  According to the directions of Bombay High Court, the government was supposed to decide on one of the two options suggested before 1st of October. But the affected citizens of Mahul have not received any decision or intimation from the government till date. Even after requesting the government several times to address their issues residents of Mahul got no single word from government’s side. And hence these citizens decided to start the ‘Jeevan Bachao Andolan’  at Ambedkar Nagar, Vidyavihar, saying that if the government does not have a place to rehabilitate these citizens in any part of the city, then they will reclaim the original land from where they were displaced a year ago.

“High court has given stay order on the demolition of the houses within the 10m area of Tansa pipeline. Now, if other people are living near the Tansa pipeline, then why can’t we?” asked Rekha Ghadge, one of the protestors. “The government says that they do not have the place to rehabilitate us, but we have proof that there are 70,000 empty flats available in the city, those which are specially built for rehabilitation,” said Anita, another protestor.

On the first day, despite having the peaceful protest, police warned that they will take action and file cases against few. The Police didn’t allow people to cook food near the footpath where the affected citizens had been sitting peacefully since the morning. Shiv Sena MLA Mangesh Kudalkar and President of Mumbai wing of Sambhaji Brigade visited the protest site and showed their support. No government official took cognizance of the protest on the first day.

On the 2nd day of protest at 11:30 am police picked up around 200 citizens and detained them at  Tilak Nagar police station to pressurize them to stop the protest and go back to Mahul. Determined citizens from Mahul protesting to save their lives continued to protest at the police station itself. As more people started pouring in the police station, the police were compelled to release the citizens and they were allowed to continue their sit-in. Also, the delegation was called to meet by Aditya Thackeray, President of Yuva Sena (youth wing of Shiv Sena) and have been assured all support from the party. The affected citizens from Mahul have decided that protest will continue till their demands are met by the government.

Before taking this extreme action of acquiring the land from where the Tansa pipeline project affected were displaced, the affected citizens had tried to approach the government in various ways. They wrote to their respective MLAs, but after receiving no words from any of the MLAs, these citizens from Mahul gheraoed the MLAs outside their residents/office on 2nd of October. They asked their MLAs about what steps their government had taken to resolve the issue of rehabilitation especially on the lines of directions given by the Bombay HC. No MLA showed up to have a dialogue with the aggrieved citizens. Following all this, the residents of Mahul lost all their patience and decided to start a protest demonstration demanding answers from the Maharashtra Government.

The people living in Mahul are rightful citizens of the Mumbai city and have been fighting for their right to safe housing since past one year now. Living one more day at Mahul is equivalent to reducing the number of days in their life. It is hence nothing less than a murder, or in fact, a genocide, to force 5000 families to live in such an environment. The Maharashtra Govt needs to act fast and provide safe housing to all the 5000 families (close to 30,000 citizens) from Mahul. It is the responsibility of the state to safeguard the Right to Life of each of its citizens.