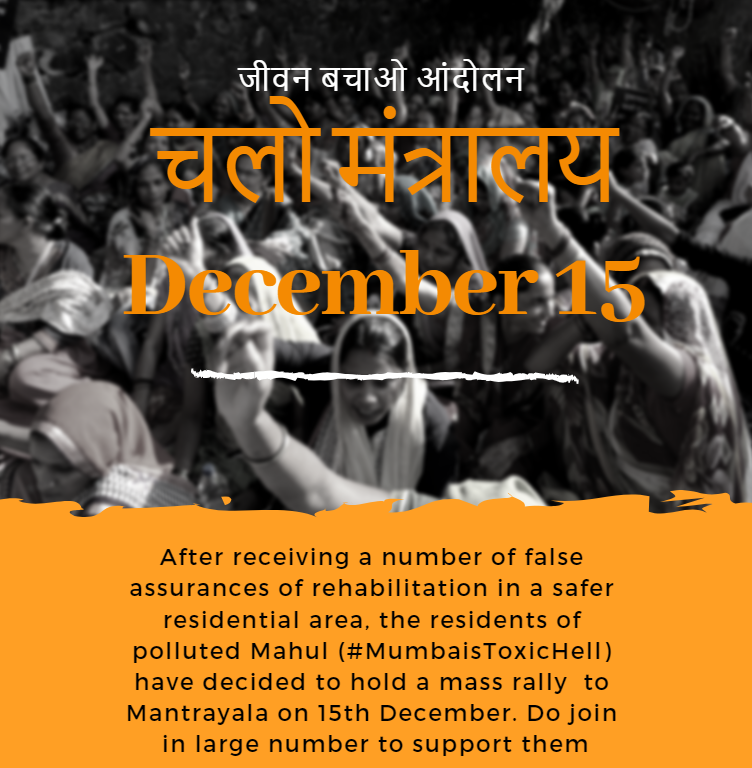 An appeal by the residents of Mahul (aka #MumbaisToxicHell) to all individuals and organisations to show solidarity and join a peaceful march from Carnac Bunder to Mantralaya on 15th December 2018 to demand freedom from toxic living conditions which the government has forcibly imposed on the poor of Mumbai city.

Mahul is a severely polluted industrial area in Mumbai’s eastern suburbs with air toxicity levels so high, that two Indian courts have declared it unfit for human living. And yet, the Maharashtra Government have chosen to dump Mumbai’s poorest residents here and leave them to die a slow and horrible death. Like over 60% of Mumbai’s population, these people were slum-dwellers who settled in Mumbai decades ago, leaving behind poverty in their native villages and dreaming of a better life for their kids. Overnight, their homes were demolished, under the pretext of ‘development’ and ‘security’ and they were thrown in one of the world’s most toxic neighbourhoods.

The Bombay High Court has ordered the State Government to find more humane accommodation for these 5,500 families, and yet the Maharashtra Government chooses to ignore court orders. Meanwhile, more than 150 of the poor people who had been evicted from their slums and ‘rehabilitated’ in Mahul have died from pollution-related illnesses in the last 18 months, while dozens of others are critically ill. Even the Municipal Corporation of Mumbai admits that the real figures could be much higher. There was also a refinery blast in August, just 20 metres from the ‘rehabilitation’ site, and these residents left to rot in hell, live in constant fear and disease. In protest, the residents of Mahul have “occupied” a pavement in Vidyavihar, near the old slum from which they were evicted, where they have been protesting for over 40 days now, demanding safer accommodation, fit for human living, as ordered by the Mumbai High Court.

According to data obtained using the Right to Information Act 100,000 houses (list submitted to Govt.) which have already been constructed using public money under the Project Affected Persons (PAP) category are available in Mumbai, and the Mahul residents have been demanding their right to be rehomed here. Yet, the Maharashtra state govt. has submitted an affidavit before the Court that they will not provide accommodation to the people of Mahul, and the Maharashtra CM refuses to even acknowledge the urgency of the issue or meet these residents, choosing instead to devote his spare time to attending music concerts and cutting ribbons at inaugurations, while these people die, one by one.

Out of helplessness and desperation, we, the residents of Mahul have now decided to take to the streets and go to the CM themselves, and appeal to all individuals and organisations with a conscience to support us in our demand for basic right to life and clean air for all sections of society, as accorded by the Indian Constitution. This is not just about the urban poor, it is also about pollution, environment, and basic humanity and justice – subjects affecting every class of society today. Please do join us on 15th December.
Meanwhile, you can sign the petition of a resident to support her demand to move them out of Mahul. Sign here