BPCL Blast: Hairline escape from catastrophe which could claim thousands of lives 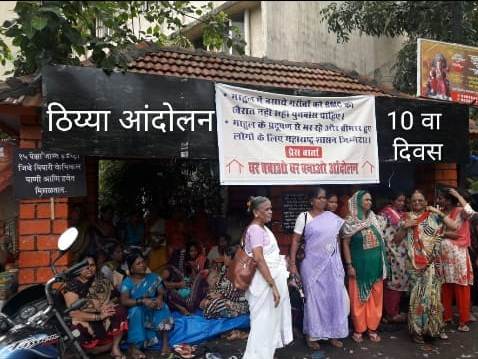 The blast in the BPCL- Petroleum company at Mahul confirmed one of the fears that the residents of Mahul think can cause risk to their lives. The trauma of blast once again organised the residents of Mahul. All the residents got united under the Ghar Bachao Ghar Banao Andolan and marched to the local ward office of Municipal Corporation accompanied by Medha Patkar, on 10th August 2018. They also did ‘Thiyya andolan’ for ten days demanding a safer place to live.

Mahul which is located near chembur in mumbai is infamously referred as “where the poor are sent to die”. In the year 2017, 20,000 homes had been cleared in the demolition drive by the municipal corporation, and 30,000 Project Affected People were relocated to the Mahul complex in M-East ward, nearly 12 km away from their original settlement. Alongside the Eastern Expressway, 72 seven-story apartment buildings are located in close proximity to major industrial factories such as the Hindustan Petroleum and Bharat Petroleum refineries, Sea Lord Containers, Aegis Logistics Ltd, Tata Power, Rashtriya Chemical, and Fertilizers. Since then as this place extremely polluted, rehabilitated people are continuously demanding the government to rehabilitate them to a safer place.

People who were rehabilitated were in constant fear of accident which came true on 8th august when a major fire broke out at Bharat petroleum causing injury to 41 people. For about three to four days, all the people of Mahul were scared and restless as such explosion can cause serious health injuries like loss of hearing or respiratory diseases and as explosion may also lead to collapse of buildings surrounding it. There were several incidents reported of cracks on walls of their houses, broken glass windows. Residents found it difficult to sleep inside their houses during those days fearing another accident. This accident shows that Mahul is very unsafe place for human inhabitants, such accidents may happen again.

After shifting to Mahul the people displaced started facing serious health problems due to inhospitable environment and air quality which lead to death of 23 people. A survey conducted by KEM Hospital and cited by the National Green Tribunal (Western Zone) petition filed by residents of Mahul,  reports that “67.1% of the population had complaints of breathlessness more than 3 times a month.” Other common ailments include skin and eye irritation, choking, vomiting, and hair loss. Sources for the various illnesses include high levels of toluene diisocyanate, nickel and benzopyrene and other volatile organics. The poor drainage systems, solid waste removal, and contaminated water supply all exacerbate the negative health effects of the poor environmental standards.

Taking this into the consideration people of Mahul started protesting against this action of the government, after a continuous protest in various forms they could not achieve their demands. Hence they filed a case against the government in March 2018.

On the day of blast people of Mahul had the court hearing, “On that day we were coming from court, some people left for their work, children left for school and some of us left for home. While going back to their home near Ghatkopar which is approximately 12 km from the spot of the blast, we heard the horrible sound. When we reached home we got to know that it is the blast in the petroleum company at Mahul”.

On 9th August they decided to protest against this. On 10th August residents of Mahul held a protest rally to the office of ward officer Mr. Ghag. Mostly women were leading this protest. He was asked to take responsibility for the safety of rehabilitated people. “When people from various wards are rehabilitated in his ward, then it was his responsibility to tell the government that this place is not livable, now it is his responsibility to take care of us. We demanded him to move us to a safe place. He did not have answers to any of our questions. He said that he will come back to us within 48 hours, but he never turned up. ” said Rekha Ghadge, one of the protestor.

After the rally, we continued our protest with ‘Thiyya Andolan’ for 10 days but no government official came to listen to our grievances. they , then,  gheraoed the house of the housing minister Prakash Mehta and staged silent protest in front of his residence. Minister couldn’t ignore the crowd and came out of his house to address us.  He said that your case is in court so we cannot do anything about this but at the same time expressed his willingness to address the problem in order to dilute people’s anger. “We have submitted memorandum to the housing minister. We will decide our next course of action very soon.”, said one of the protesters.