100 + Movements, organisations and environmentalists write to 785 Lok Sabha and Rajya Sabha MPs from 28 states and 8 union territories in the country appealing them to take a stand against the Draft EIA Notification 2020 and to demand its immediate withdrawal! 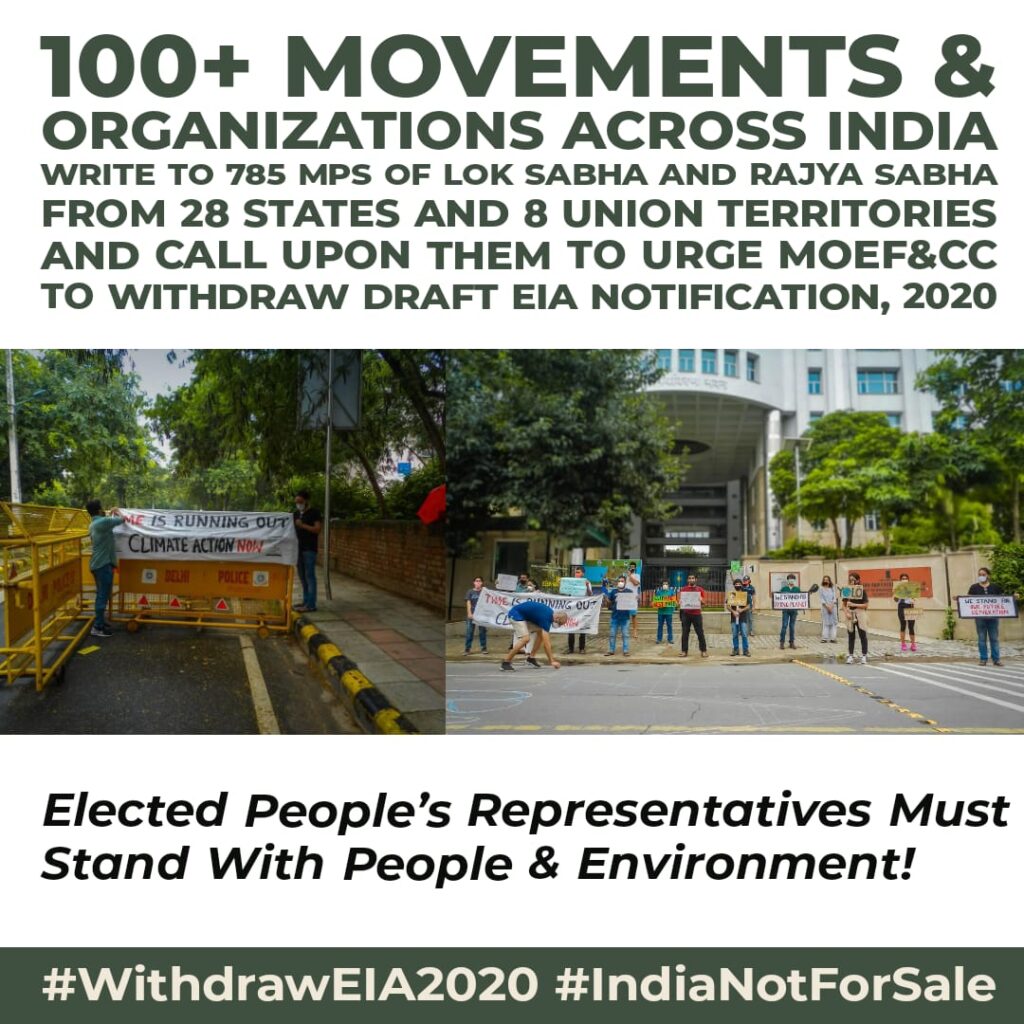 Dear Friends in the Media,

The Draft Environment Impact Assessment (EIA) Notification 2020 has received serious criticisms from environmentalists, civil society activists and citizen’s groups since its release on 12th March 2020, even as our country was just about acknowledging the gravity of the Covid-19 crisis. Following this a national lockdown started from 25th March 2020 owing to the pandemic which has still not shown any signs of dying away anytime soon. At a time like this when dealing with the pandemic and welfare of the people should be of utmost priority to the state and when people are unable to effectively engage with the process, the government is instead unleashing draconian and destructive policies and actions, set to overhaul the environmental governance of the country and remove even the existing safeguards and protections.

This draft legislation comes at a time when our country is facing the worst environmental crisis. India has ranked at 179 out of 180 countries i.e. 2nd last on the global Environment Performance Index for air quality in the year 2020. Its general ranking is a dismal 168/180. 14 out of 20 most polluted cities in the world are reportedly in India. As per the Lancet report 12.5% of total deaths in 2017 were due to air pollution. It is not just a matter of figures, but daily news reports showcase the multiple disasters faced by the citizens of the country, either in the form of industrial disasters, accidents, building fires and collapses, floods, draught, forest fires, landslides, human-animal conflict, food and water crisis and such, that indicate the urgent need for strengthening our environment policy to address the crisis of climate change and put to a halt the environment destruction that is rapidly taking place.

We, a group of 100 + Movements, organisations and environmentalists, who are part of a national campaign to oppose the Draft EIA Notification 2020, have over the last week addressed emails to write to 785 Lok Sabha and Rajya Sabha MPs from 28 states and 8 union territories in the country calling upon them to take a stand against the anti-environment and anti-people Draft EIA Notification 2020 and demand its immediate withdrawal. As elected political representatives these ministers are duty bound to protect the interests of the people and the nation and its resources, which this draft legislation is bound to adversely impact. We have called upon the ministers to write to the Ministry of Environment Forest & Climate Change (MoEFCC) to demand withdrawal of the Draft EIA Notification 2020 and demand instead that a strong environmental governance be put in place in consultation with the people, for protecting the ecology and natural resources of our country for present and future generations.

Some of the major issues with the Draft EIA Notification 2020, which takes the environmental jurisprudence of our country back several steps, are provided in the letter. The proposed draft by allowing for grant of post facto clearances for projects commenced without environmental impact assessment, in effect takes away the requirement for prior environmental clearance. It thereby provides provision for regularizing violating projects which only serves to encourage violators and violations. It also introduces a single step environmental permission for certain projects, which will not have to go through the environment impact process. It expands the list of projects exempted from public consultation. Even as climate change effects are leading to rapid changes in the environment, the period of validity of environmental clearances has been increased. It weakens the compliance mechanism by reducing the monitoring requirement from every 6 months to annually. These and several other grounds of objections that expose the blatant flaws in the draft legislation have been provided in the letter addressed to the MPs (Attached herewith).

Looked at from any angle, the Draft EIA Notification 2020 is detrimental to the environment rather than protecting it. We expect that every minister who claims to love our country, its abundant natural resources and its people will consider the objections and take immediate action to oppose this problematic legislation.