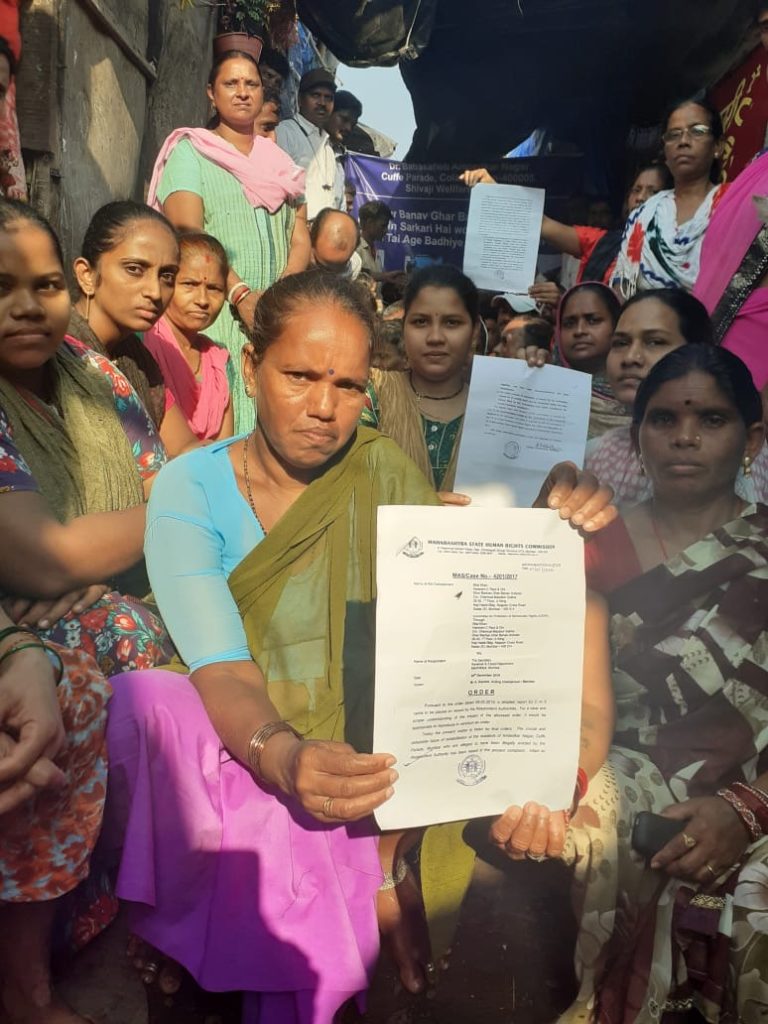 In the 71st year since India became a Republic, Maharashtra State Human Rights Commission (MSHRC) upheld the rehabilitation rights of the slum dwellers living on Mangrove land. MSHRC has directed the Chief Secretary of Maharashtra to form a committee of experts in order to make a rehabilitation plan for around 1500 families of Ambedkar Nagar slum in Cuffe Parade, Mumbai whose houses were demolished by the Mangrove Cell of Maharashtra Forest department in May 2017. “Finally after almost three years since our houses were inhumanly destroyed overnight, our rehabilitation right has been recognized. It’s the most appropriate gift one can get just before Republic Day’, says Jagdish Gujar a resident of Ambedkar Nagar slum who lost his house in the demolition drive. The order was passed by MSHRC on 30th December 2019, however, the detailed order copy was received by the complainants on 24th January 2020.

The Mangrove Cell of Maharashtra Forest Dept. has been demolishing slums in Mumbai which are located in and around the Mangrove areas pursuant to an order passed by the Bombay High Court directing the government to conserve and protect mangroves. While doing this the Cell has completely ignored the rehabilitation rights of people living in these areas. Ghar Bachao Ghar Banao Andolan (GBGBA) has been agitating against this injustice ever since the demolition drive started. When the Ambedkar Nagar slum was demolished, a complaint was filed by GBGBA before MSHRC, in which matter this order was finally passed after extensive hearing.

GBGBA supports the conservation and protection of not only mangroves but environmental rights in toto. However, this cannot be done at the cost of basic human rights of the slum dwellers. GBGBA does not support the manner in which the Forest department has been executing orders for the protection of mangroves while blatantly violating the right to shelter, right to life and dignity of the slum dwellers. In the name of protecting trees, the government cannot jeopardise the lives of poor citizens by rendering them homeless by denying them their right to shelter and proper rehabilitation. Mangrove Cell by cracking down on the meagre hovels of the poor while conveniently turning a blind eye to the major violators who have cleared out and destroyed large tracts of mangrove areas for real estate development in Mumbai and Navi Mumbai has shown it’s anti-poor stance.

Before carrying out any demolition drive, due process of law should be followed which includes rehabilitation of all eligible slum dwellers and preserving the dignity of all. Instead of doing that the Mangrove Cell has been demolishing slums summarily. While the Cell defended itself by saying that the Forest Department does not have a rehabilitation policy to rehabilitate slum dwellers, MSHRC refused to accept this stand and directed the formulation of a special policy for the rehabilitation of residents of Ambedkarngar. MSHRC also said that the government cannot be discriminatory by rehabilitating one set of slum dwellers while ignoring other similarly placed persons. MSHRC has directed compliance with the order within three months.

GBGBA along with the Ambedkarnagar residents welcome and celebrate the order passed by MSHRC and hope that the Government will act expeditiously to comply with the order. GBGBA also hopes that the order will come to the aid of similarly placed slum dwellers to protect their right to housing.