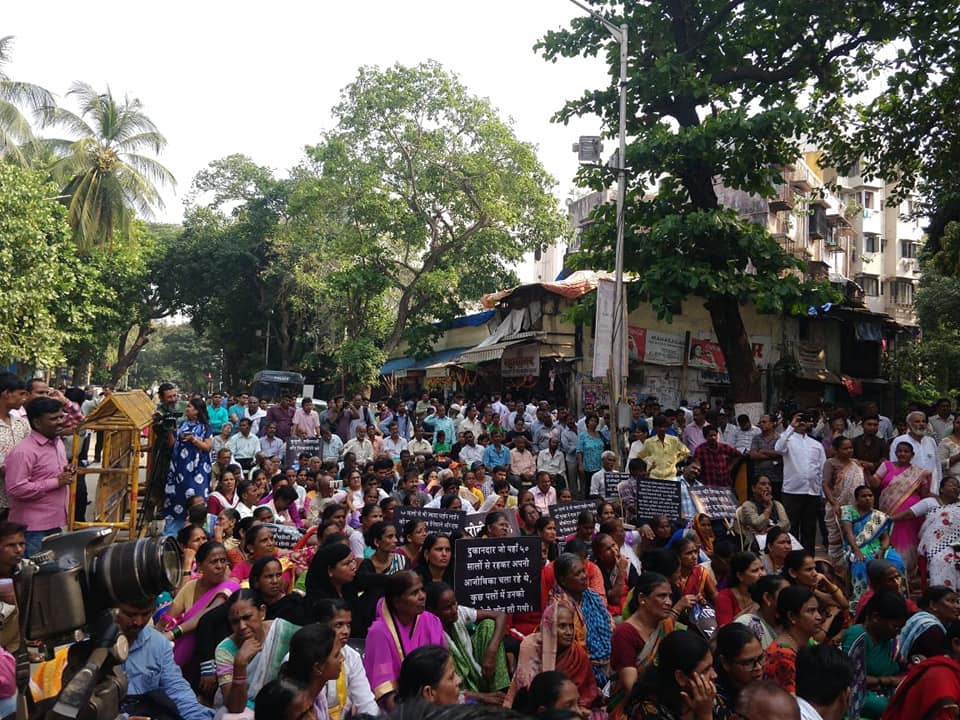 Mumbai : “Until and unless we do not build large scale movement of people, we will not be able to save the political democracy and hence the social and economic democracy as was said by Dr. B R Ambedkar.”, said Dalit rights activist Suresh Sawant while reinforcing the importance of values of the Constitution. He was addressing the program organised by Ghar Bachao Ghar Banao Andolan (GBGBA), which is part of organising the Sanvidhan Samman Yatra which began on 2nd September 2018 from Dandi, Gujarat. He criticized the Chief Minister of Maharashtra, Devendra Fadnavis, for his declaration that religion should have complete control over State power.

Sanvidhan Samman Yatra organised by the National Alliance of People’s Movements (NAPM) entered its second phase today with organising a huge public meeting held at Chaityabhumi, Dadar in Mumbai. Numerous organisations who are part of various ongoing struggles have been coming together in face of the increasing attacks on marginalised sections, people’s movements, social activists and an intense attack on the Constitutional rights of all citizens in the country. The program started at 2pm in the afternoon with the protest songs performed by Swadeshi Hip-Hop collectives in the presence of over 500 people. Activists from various social movements, such as Rekha Ghatge from Mahul Sangharsh Samiti, Prakash Bhoir and Stalin Dayanand from Save Aarey Movement, Teesta Setalwad from Centre for Justice and Peace, Meera Sanghmitra from NAPM, Ashish Ranjan from Bihar wing of Aam Aadmi Party (AAP), Dalit Rights activist Suresh Sawant and Senior Journalist Nikhil Wagle spoke on the issues affecting the citizens of the country.

Prakash Bhoir from Save Aarey forest movement said, “ 145 acres from the land of Adivasis has been given to the Veterinary college, where adivasis are treated worse than animals. We had to fight even for the basic facilities like toilet. Our land has been given for construction of the Mumbai Metro and now they are throwing us out of the our land. They say that the adivasis are not safe in the presence of wild animals, but I would say that we are not scared of tiger, but of their development model.”

“Today we are able to fight for our rights because of Dr. Babasaheb Ambedkar and the Constitution written by him. This is a democratic state and we should be capable enough to pressurize our government to work for our welfare. Today’s government is for the rich, it’s not for the poor and workers.” said Rekha Ghatge, activist of Ghar Bachao Ghar Banao Andolan. She herself is victim of the failed rehabilitation at Mahul. She explained that Mahul is the center of various industries and oil refineries which causes high level of pollution. A 2015 interim judgement by the national green tribunal stated that Mahul is “unfit for human habitation”. They have assembled under GBGBA, filed a case against the government to fight the injustice happening in Mahul. On 8th of August, the Bombay High Court ordered the BMC to stop any further resettlement in Mahul, and to decide on a rent compensation or temporary accommodation for the remaining Tansa pipeline-affected people. The High Court has also asked IIT, Mumbai to conduct a holistic survey of Mahul, which will take at least four months. “Government has created a pyre for us in Mahul”, she spoke agitatedly.

“Maharashtra police has been applying section 144  all over Maharashtra. Whenever we try to organise people against injustice, police puts restrictions on organising such programmes and at time even ensures that such programs cannot take place”, said Nikhil Wagle, senior journalist, pointing to the fact that the organisers for today’s program had been pressurized by the police to cancel the rally which was scheduled from Veer Kotwal garden to Chaityabhumi.

The ruling parties has very systematically eroded principles of constitution by time and again favoring anti people, corporate friendly economic policies. The slogans of demonetization and digital India were nothing but a step toward deprivation of many toilers from their sources of livelihood and income.  Not only that, it has once again polarized our society into majority and minority through their dream of a Hindu Rashtra.

We all have an immediate responsibility to safeguard the constitutional values and principles of humanity, based on social justice, liberty, equality, fraternity, scientific and rational thinking in the social psyche to deal with all these political, economic, social, cultural challenges. It is equally vital to aim for economic equity, social parity, environmental protection, sustainable development, establishment of people’s rights over access of resources and annihilation of caste and patriarchy.

National Alliance of People’s Movement (NAPM) and other like minded organizations have taken upon themselves to   take out a nationwide tour “Samvidhan Samman Yatra” to restore and protect the core values of our Constitution and democracy. The yatra commenced it’s phase II from Chaitya Bhoomi, Dadar.